Primary Sclerosing Cholangitis (PSC) causes chronic (long lasting) inflammation in the bile ducts inside and outside the liver.

The bile ducts become inflamed and scarred, and eventually blocked. This causes bile to build up in the liver. Bile is the yellow-green liquid that is put out from the liver, stored in the gallbladder and passes into the small intestine to help digest food by breaking down fat.

Too much bile in the liver kills off liver cells and can cause scarring (cirrhosis). Eventually, the liver can’t function anymore.

This in turn can lead to other conditions including: 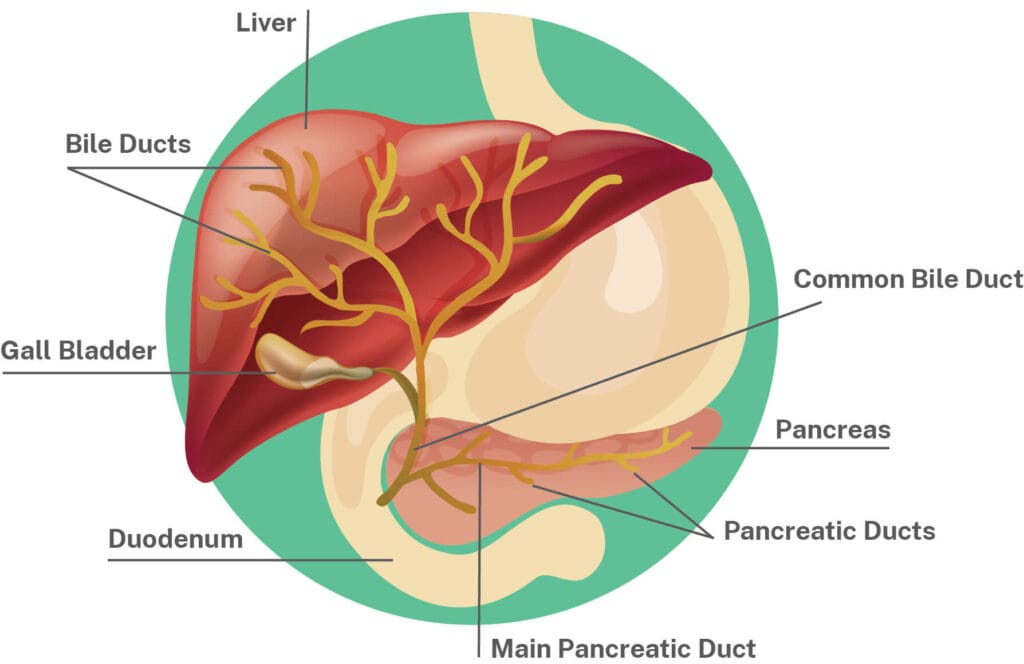 The disease gets worse very slowly. Some people have PSC for years before they notice symptoms. Once they are diagnosed, it can take 10 to 15 years or more before liver failure develops.

Some other rare autoimmune disorders are also more common in people with PSC and in their family members.

What are the symptoms of PSC?

PSC often doesn’t cause any symptoms. People only find out they have PSC because they have a blood test for something else.

If you do have symptoms, at first they might include:

As the disease gets worse, other symptoms may appear such as:

Symptoms may come and go, or they may get worse over time.

See your doctor if you have bad, unexplained itching over most of your body and the itch doesn’t go away when you scratch it.
Read more about the symptoms of liver disease

How is PSC diagnosed?

You may also have a scan called Magnetic Resonance Cholangiopancreatography (MRCP) to look at your bile ducts. This is a type of MRI scan.

Sometimes a procedure called endoscopic retrograde cholangiopancreatography (ERCP) is used instead of or as well as an MRI. This is done by passing a flexible tube down your throat. Dye is put into the bile duct where it connects with the upper part of your small intestine. X-rays are used during the procedure to track where the dye goes. Narrowed sections of the bile duct may be able to be stretched open to allow the bile to get through.

If it’s still not clear what’s causing the disease, you may need a liver biopsy. This is when a small piece of tissue is removed from the liver to be examined under a microscope.

Why did I get PSC?

It’s not clear why some people develop PSC. It’s thought to be triggered by the immune system reacting abnormally to an infection or a toxin. It’s also likely that you inherit the genes for PSC. The cause of PSC is probably different for different people.

PSC is most common in men aged 30 to 60, and in people with northern European heritage. It seems to be more common in Australia than previously thought. It’s one of the reasons that people need a liver transplant in Australia.

Inflammatory bowel disease and PSC don’t always happen at the same time. If you have one of these conditions, it’s important to monitor for the other one too.

How is PSC treated?

So far there’s no treatment that can slow or reverse the liver damage that’s caused by PSC. Treatments will focus on easing the symptoms and preventing complications.

Sometimes it is necessary to improve the flow of bile if there is a tight narrowing found at the time of an ERCP procedure. This may involve stretching the narrowing using a balloon (called a dilatation) or inserting a stent into the bile duct to hold it open.

PSC can cause frequent infections, so people with the condition often need to take antibiotics which many mean being admitted to hospital for a short time. They may also need vitamin supplements, as PSC stops the liver from absorbing some vitamins properly.

People with PSC need to be monitored for complications. For example, your doctor may order a bone density scan to check for osteoporosis and a colonoscopy, which looks inside the bowel for disease. These tests are usually needed on a regular basis every one or two years.

Portal hypertension is sometimes treated with a type of medicine called a beta-blocker.

If you’ve been diagnosed with PSC, there are a few things you can do to make yourself feel better.

PSC Support Australia. What is PSC?

Keep up to date with activities, campaigns, developments and news.